The store will not work correctly in the case when cookies are disabled.
Skip to the end of the images gallery

Skip to the beginning of the images gallery
France

€6.90
Item code:
74KEST200
EAN code:
3547130090947
Description
Oliviers&Co. has decided to revisit a product that is emblematic of the kitchen: Ketchup, in collaboration with Olivier Streiff, a chef renowned for his audacity, his passion for vegetables and his love of southern cuisine... A recipe based on the Sicilian tradition, where the spices and woody notes of Marsala are delicately combined with tomato... A breathtaking balance of taste as the different ingredients harmonize to perfection! Not very sweet, the extraordinary subtlety of Ketchup makes it suitable for all cuisines, Mediterranean as well as Asian.
Food pairings
To be used for sauces: BBQ sauce, cocktail sauce, american sauce, for whitemeats marinade, to pep a tartare, to finsh a gazpacho and of course with fries, pasta…
Ingredients
Name: Gastronomic Ketchup by Olivier Streiff Net quantity: 310g Origin: Product of France Ingredients: tomato concentrate, water, Marsala wine (sulfites), balsamic vinegar of Modena (cooked grape must, wine vinegar, sulfites) alcohol vinegar, sugar, extra virgin olive oil, salt, modified con starch, PDO espelette pepper, chili sauce (vinegar, red pepper, salt) thyme, lavender, cumin. Storage conditions: keep refrigerated after opening and use soon
Nutrition Facts 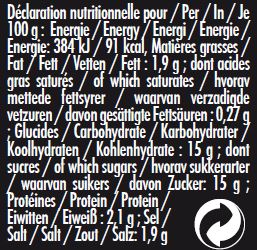 Learn More
The thirty-eight years old Chef has been collaborating with Oliviers&Co. for many years now. After working at “La Bastide de Saint-Tropez”, “La Chèvre d'Or”, the “Grand Hôtel du Cap” and “Maya Bay”, he opened his own restaurant in Beaulieu-sur-Mer (South of France): "La Raison Gourmande". There, he created a new menu almost every day according to the market produce. In 2013, one of the most influential French restaurant guides, “Gault &Millau” awarded him with three “toques” (out of a scale of five) and also assigned him as “Tomorrow’s great chef”.

Subscribe to the Oliviers & Co Newsletter for exclusive offers, delicious recipes & more
+
15% Off

Your next online order

Applies to new email subscribers only. One time offer will be sent via email. Your email is safe with us, privacy matters.

Thank you for signing up! Be sure to check your inbox for exclusive offers, the latest product announcements.